Design of furniture. An add-on for AutoCAD 2007-2017! You can project bodies composed from plates and assemblings. Holes, grooves or edgings can be applied. Execution drawings and lists are automatically generated. 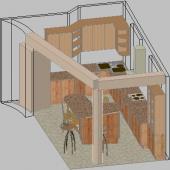 Design of furniture. An add-on for AutoCAD 2007-2017!
You can project bodies composed from rectangular plates or plates defined by POLYLINE or CIRCLE. Technology represented by holes, grooves or edgings, can be applied. On a plate or between 2 plates assemblings can be applied (hinges, pegs, handles, bars, etc.). Furniture bodies can be composed of several plates and assemblings. The plates, the holes, the grooves, the edgings, the assemblings, the bodies and the materials can be modified interactively and archived in order to be reused. Execution drawings for plates and the lists of materials, technology and costs are automatically generated.

The price is for the first license! You can buy anytime after, other licenses at a lower price!

You can be the first to write a review of FURNIT!
3DINTERSECTION for AutoCAD

An add-on for AUTOCAD or ZWCAD which determines the intersection curves between 2 sets consisting of 3DFACE, 3DSOLID or 3DMESH entities. It can also generate cross sections to a POLYLINE and can draw the conversion to 3DFACE of the 3DSOLID.

An add-on for AUTOCAD 2002-2017 or ZWCAD 2014 or 2015, which determines the developed section of one set of 3DSOLID, 3DMESH or 3DFACE entities and vertical planes passing through a 2D POLYLINE which may contain arcs, in XOY plane.

An add-on for AUTOCAD wich identifies wooden beams from 3D DWG drawings of wooden houses. The result of the program is a drawing with the identified parts (numbered and dimensioned) and a file of quantities that can be loaded into EXCEL.

Simple, powerful and inexpensive CAD software for surveying. You can do triangulation, isolines, color-filled contour maps, sections, intersections, volume and much more. You can process hundreds of thousands of points or triangles.

An add-on for AUTOCAD, for the TRIANGULATION of a set of point, isolines, KML creator, the VOLUME of a set of 3dface entities, loading of XYZ points files and sections.