BurnInTest is an easy to use software tool that simultaneously exercises the major components of a computer, to test for endurance and reliability. Tests include CPU, RAM, Disk, Video, CD, DVD, Blu-Ray, Printer, Sound, Network and video playback. 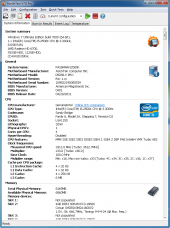 Society's reliance on computers means that the cost of hardware failure can be enormous. BurnInTest can thoroughly exercises PC hardware in the shortest period of time so intermittent or hidden problems are found before they turn into a disaster.

BurnInTest is an easy-to-use software tool that simultaneously exercises all of the major components of a computer to test for endurance and reliability. The user can select hardware components to test and individually adjust the load placed on each one via slide bars. Each test reports results to its own window and results are summarised along with any errors detected in the main program window.

A computer's major components (including CPUs, raw and formatted hard drives, tape/CD/DVD/Blu-Ray drives, sound and graphics cards, RAM, network connections and ports) can be tested at the same time. Results can be saved to disk, printed or exported as a graphical image. Other features include periodic logging, a temperature monitoring interface and max CPU temperature test, and timed test runs.

BurnInTest is suited to computer enthusiasts, systems integrators and manufacturers or anyone who wants to cost effectively evaluate their system.

You can be the first to write a review of BurnInTest Professional!
BatteryMon

OSFMount allows you to mount local dd image files (bit-for-bit copies of a disk partition) and CD images in Windows.

Award winning, easy-to-use benchmarking software for Windows. It tests all of the computer's subsystems and provides benchmarked comparisons between the test PC and other standard baselines downloadable from the PassMark website.