KeepSafe is a program that will automatically archive files on your computer of a specified file whenever they are saved. It is the intermediate step needed to protect files between backups and only works on files you actually change. 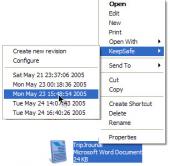 KeepSafe is the ultimate file protection and revisioning program. It offers a seamless way to protect all of your most important files as you work on them ? in real time! It does not replace a full system backup, but rather provides protection during those times between backups and only works on files you actually change ? saving disc space.

When installed, KeepSafe can be configured to protect certain file types (i.e.-.doc, .xls, .pst, etc.) or entire directories (i.e. "My Documents"). From then on, anytime a change is saved to one of those files, KeepSafe will automatically back up that file to a user defined location (typically a server, external drive, or backup directory on local machine).

Have you ever had a document become corrupted just when you were saving it? Have you ever overwritten an important file, wished you could go back to an earlier version, or had your hard drive crash and your most recent backup was a month old? Do you have a computer? Then you need KeepSafe!

KeepSafe 1.1 adds "Diff" support so that only changes in new versions are saved rather than the entire file. You can try it out for yourself. Stardock originally developed this to solve the problem of people simply not making backups. The solution, KeepSafe, integrates data archiving into the file system itself.

You can be the first to write a review of KeepSafe!
Astral Masters

Astral Masters combines the best features of its predecessor, Astral Tournament, and collection card games. Compete in turn-based play against an opponent casting various spells and summoning fantastic creatures to your side.

Blog Navigator is a fast and easy-to-use program for browsing blog sites. It also includes features for reading blogs offline, as well as putting different blog sites together to create your own customized browsing preferences.

BS Hacker is a unique hacking simulation game. You enter the underground world and play the role of a hacker, working against a system that aims to control everything.

Delve into a future world where every criminal has a debt to society, and the darkness of space is where it's to be repaid. Join in missions with up to 99 other criminals and earn your freedom, so that one day, you can finally go home.

Use DesktopX to enhance your standard desktop icons; animate your desktop; put calendars, weather objects, MP3 players, performance meters, and more on your desktop at a fraction of the memory footprint of stand alone programs.