A challenging game of ice matching and cracking. Featuring 5 modes of play including puzzle and solitaire modes, or join Samantha Bloodworth as she tries to find her way to safety across the shattering Ross Sea in the story based adventure mode. 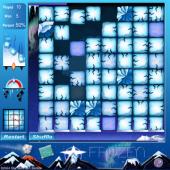 Inspired by the desolate grandeur and stunning history of Antarctica, Star Mountain Studios has created a challenging puzzle game based at the South Pole. The main character featured in the game is Samantha Bloodworth, a reporter sent to the pole to cover studies being done on robots destined to serve in outer space. While there, she experiences a series of disasters that threaten to strand her in the most desolate place on earth.

The trial version is limited to the first 3 levels of the adventure mode. The free online version offers unlimited play and saves the high scores and stats from all the game modes.

Samantha must manage to cross the shattered ice field that had covered the Ross Sea near McMurdo. Her only companion is an eerie robot named PEDRO who is one of the prototype ?robonauts? being tested in the rigors of the pole. Frozen is played by matching the cracked edges of falling chunks of ice in order to sink them and shift the blocks above them into a better position for the next move. The game can be played in a variety of modes, from the intricate planning of the solitaire modes to the more dynamic shatter fests of the puzzle modes. An enhanced feature of the game is Samantha?s notebook where she recounts her perilous journey across the ice over the 22 levels of the adventure mode.

You can be the first to write a review of Frozen!
Bergman

All you have to do is be the first player to discard the five cards you are dealt to start the game, simple right? Well simple doesn't come often in Bergman! See if you can beat the computer in this challenging card game or end up holding the deck.

Download Findola for hours of fun matching not one but three sets of tiles at the same time, but watch out for the wild tile before he freezes the board solid or explodes! Earn extra points by matching tiles when the bonus stars are flashing.

Help Weird Helmet find a safe path across the void while scoring as points as possible before his air supply runs out!