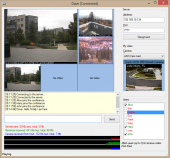 RVMedia is a set of Delphi and C++Builder VCL components having the following functions:
- receiving video from local web cameras and IP-cameras;
- configuring IP-cameras and controlling their rotation;
- reading sound from a microphone;
- sending and receiving video and audio data via the Internet;
- organizing video chats and video conferences (either as directly connected applications or using a client-server model).

Components in the package:
1. TRVCamera:
- receives video from different sources: cameras, remote IP-cameras, screen, video files
- configures IP-cameras;
- controls rotation of IP-cameras.
Different manufacturers (such as Axis, D-Link, Panasonic, Foscam, Samsung) offer different programming interface for configuring and sending commands to their IP-cameras.
TRVCamera provides a single simple programming interface for all supported IP-cameras.
2. TRVCamView is a visual component that displays video from TRVCamera or TRVCamReceiver.
3. TRVCamMultiView is visual component that displays multiple videos from different sources.
4. TRVCamControl is a visual component that controls IP-camera movement.
5. TRVMicrophone reads sound from a microphone. Optionally, it applies some sound effects.
6. TRVMicrophoneView is a visual component that shows a microphone activity.
7. TRVCamSender sends data via the IP network; the supported data types: video, audio, files, command, arbitrary binary data. These data can be received by TRVCamReceiver or TRVMediaServer.
8. TRVCamReceiver receives data from TRVCamSender or TRVMediaServer.
9. TRVMediaServer receives data from multiple senders and resends them to multiple receivers.
A receiver, a sender and a media server have special methods for implementing chats/messengers/conferences (such as managing groups of clients (to implement chat rooms), managing
lists of allowed senders and receivers (to implement contact lists).


You must be logged in to write a review

You can be the first to write a review of RVMedia!
TRichView for C++Builder