Free M4A to MP3 Converter converts the following audio file formats: wav to mp3, m4a to mp3, aac to mp3 and ogg to mp3, plus others. You can select audio files and convert m4a to mp3, for instance. 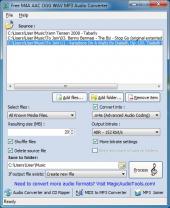 Free M4A to MP3 Converter is an easy-to-use audio m4a to mp3 converter program. You simply add your audio files or folders to the program and pick the output format such as wav to mp3 or m4a to mp3. Then you can choose an output bitrate and a folder in which to save the output. Finally, you can proceed with the conversion of mp3 to ogg, as an example. Free M4A WAV to MP3 Converter is available for you to try right away.

You can be the first to write a review of Magic M4A To MP3 Converter!
Magic Audio Converter and CD Ripper

Magic Audio Merger will help you join audio fragments and random bits together even if they come in an assortment of audio formats, producing a single large file in a format of your choice. Merge audio clips into a single track in few clicks!