Pocket Dictate is a Pocket PC voice recorder. You dictate directly on your Pocket PC using the buttons on the unit. When done, tap send and the dictation will be compressed, encrypted and sent to your typist by email automatically. 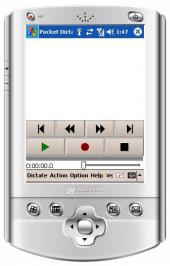 Pocket Dictate is a voice recorder for a palm sized Pocket PC. You dictate directly on your Pocket PC using the buttons on the unit. When done, tap send and the dictation will be compressed, encrypted and sent to your typist by email automatically.

For ease of use, operation of the record and playback features is designed to closely mimic that of old style dictation recorders. For example, you record by holding down the record button on the side of your Pocket PC. Release the button to stop. To continue from where you were press it down again. You can also playback, rewind, insert or overwrite as required using the keys on the front.

Features:
* Record and playback dictation using the buttons on the Pocket PC.
* Editing, inserting and overwriting. You can select between record overwrite, record insert and record end modes.
* Optional voice activated recording. When selected Pocket Dictate only records while you are speaking.
* Automatic compression of audio files to reduce upload times and storage requirements.
* Encryption of recordings prior to transmission to comply with patient or client confidentiality requirements.
* Sends recording in compressed wave (wav) or dictation (dct) file formats.

You can be the first to write a review of Pocket Dictate Dictation Recorder!
AudioTime Scheduled Audio Recorder Basic

AudioTime allows you to schedule the recording of audio or replay audio at certain dates and times or regular times on certain days of week.

Axon Enterprise is a fully featured pbx server without restrictions to manage calls within a business or call center environment. Any business can implement this scalable PBX solution.

The BMS is a Windows based multi zone music and announcement system for retail stores, casinos, hotels and any other business requiring in-store background music and messaging systems. Featuring intelligent music mixing and delivery.

BroadCam Pro streaming video server is an easy to use video streamer designed to broadcast live video using a webcam (or other camera) and microphone. It will stream most pre-recorded video files such as avi, asf, wmv files, or from a cam-corder.

Stream live and pre-recorded audio over the web with BroadWave streaming audio server. Create your own radio station and broadcast events for listeners over the Internet. It handles all the technical details of serving audio so it can be played in