The goal of Car Hire Diamond Heist is to help Little Gent collect as many diamonds as he can, and to rescue the tourists. Giant rats patrolling the secret chambers underneath the car hire building try to bite our hero, so try and avoid them. 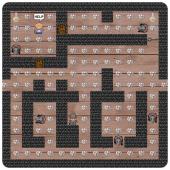 The 3rd installment in the Little Gent series sees our protagonist, flush from the profits of his successful bowler hat factor, holidaying in Malaga, Spain. After a relaxing time on the beach catching some rays and drinking pimms, our hero decides to hire a car to explore the picturesque countryside of the Costa Del Sol. Barely 30 minutes into his journey an impromptu flat tire causes Little Gent to check the boot of his vehicle rental for a spare. Rummaging around for the jack, his keen eye picks up upon a secret compartment at the back containing a briefcase of diamonds, some documents and a map. A quick perusal of the documents reveals that the car hire company is little more than a front for a sophisticated diamond smuggling operation, responsible for transporting millions of euros of precious stones from North Africa to the Andalucian coast. The map reveals that the rest of the diamonds are hidden in the secret chambers underneath the building of the car hire firm. Not only that but three aged tourists are being held against their will, their only crime to have unwittingly stumbled upon the smuggling operation after wandering too far from their over 80s coach tour. Little Gent takes it upon himself to journey to the secret chambers, set the tourists free and return the diamonds to their rightful owners before the gang returns from North Africa. The goal of this game is to help Little Gent collect as many diamonds as he can, and to rescue the tourists. Giant rats patrolling the chambers try to bite our hero, so try and avoid them. Bottles of smelling salts can be found that startle the rats enabling Little Gent to beat them away. Get the highest score and don't be bitten. You steer Little Gent by using the 4 arrow keys - left, right, up and down. F1 - Game information. F4 - Switch to full screen and back. F5 - Save game. F6 - Load game. F9 - Take a screenshot of Car Hire Diamond Heist. Escape key - End game. The game has three abandoned diamond chambers.