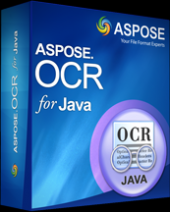 Aspose.OCR for Java is a character recognition component that allows developers to add OCR functionality in their Java web applications, web services and Windows applications. It provides a simple set of classes for controlling character recognition. The API is extensible, easy to use and compact. It provides common functionality so that developers have to write less code when performing common tasks. Aspose.OCR is aimed at developers who need to find text in image files from within their own applications. It allows developers to extract text from images quickly and easily, saving the time and effort involved in developing an OCR solution from scratch.

Aspose.OCR for Java is a character recognition component that allows developers to add OCR functionality in their Java web applications, web services and Windows applications. Read Characters from Images

Support for Popular Fonts and Styles


You must be logged in to write a review

You can be the first to write a review of Aspose.OCR for Java!
Aspose.BarCode for .NET

Aspose.BarCode is a .NET component for generation and recognition of 1D & 2D barcodes on .NET applications. It supports WPF with 29+ Barcode symbologies and allows you inserting barcodes into PDF, Word & Excel and takes output in image formats.

Aspose.BarCode for JasperReports allows developers to display high quality barcode labels on JasperReports that can be rendered further in BMP, JPG, GIF and PNG formats. It supports more than 25 barcode symbologies including Linear and 2D barcodes.

Aspose.BarCode is a Java component for generation & recognition of 1D & 2D barcodes to support Java and web applications. Now it supports 29+ barcode symbologies and allows you to take image output in GIF, PNG, BMP & JPG formats.