A hot arcade shooter from Enkord, the creators of Clash&Slash and other action games for the casual market. 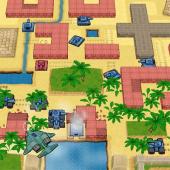 Armada Tanks challenges players to protect their military base from the enemy. In each of the game's more than 60 levels, players steer their armored carrier into position and fire on an impressive variety of opposing tanks. As players earn money for completing missions, they can purchase upgrades and well as new weapons. And when the action gets intense, players can roll over powerups that offer several benefits, including invincibility and base repairs.

As with every game from Enkord, the production values are top notch. Featuring cel-shaded graphics and 12 visually stunning environments, Armada Tanks renders all of its action on a single screen, giving the title a retro feel reminiscent of the early days of home console gaming. In addition, Enkord kept the controls simple, choosing accessible run-and-gun mechanics over a cumbersome interface. You'll be blasting the enemy into smithereens moments after loading Armada Tanks for the first time! Potent sound effects and pulse-pounding music round out the features of this modern classic.

You can be the first to write a review of Armada Tanks!
Aerial MahJong

Become a master of MahJong in the incredible aerial land!

Non-stop action space shooter with simple controls suitable for all ages! Shooting has never been so addictive. Clash'N Slash arcade game will hold you for a long time and innovative bonus system will make your game experience colorful and fun.

Clash'N Slash: Worlds Away: a sequel to our highly addictive arcade space shooter. Players must defend the planet from aliens with a variety of space based weapons and power-ups.

Solve puzzles and break tiles in the city of Clayside and build the house of your dreams!

With Emerald Tale - it's your chance to be a hero!